In Heraklion there are many sites that can accommodate events. The main ones are: 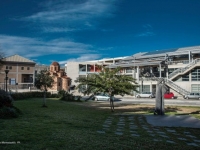 The Cultural and Conference Center of Heraklion is located at Nikolaou Plastira Street. The complex houses the following functions:

- the main multipurpose room in building D, 801 seats in total, where events such as: Lyrical theater, Theater, Musicals, Ballet, Symphonic music, Contemporary music, Lectures, Conferences and Screening
- the concert hall in building E, 237 seats, which can host Musical events, lectures, conferences and screenings
- the small amphitheater, in building A, 155 seats, for conferences, speeches and screenings
- the multi-purpose room in Building B, 175-250 seats, for Conferences, Speeches and Screenings
- the space of various events on the ground floor of Building C, 230 seats, with the possibility of dividing it into two or three halls for Conferences, Speeches, Projections and Exhibitions
- the administrative functions on the last two floors of building E
- the dining areas on the 1st and 2nd floor of building B and C (restaurant - cafeteria) serving more than 1,000 people
- the shops on the ground floor of building B.
- laboratories in buildings A and C, total area 400m2 and
- the garage capacity, 219 seats, in four underground buildings within the plot.

In the coastal street in front of Heraklion''s port, next to the main bus station there are two large buildings, former warehouses. The eastern one has been given over to the Municipality of Heraklion and turned into a small theatre. This building is made of stone with roof tiles, covering an area of 680 sq

. metres in an almost rectangular shape. The project began in 1986 by improving the exterior rendering of the building carrying out the necessary adaptations so it could function as a small theatre. It has open its door to the public in 1989, and from that time on it has staged many plays and cultural events (concerts, seminars and meetings). 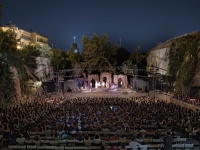 Oasis is the name given to a section of the ‘ditch'', a feature of the newer Venetian fortification that lies beneath the Bastion of Jesus. The entry to Oasis is at Cyprus Square, roughly 600 metres from the centre of the city. Oasis functioned for the first time as a small theatre during the German occupation of Heraklion (1941-1945. Then, up to 1963, as an open air public meetings space. From 1963 to 1976 Oasis was used as a summer theatre. Finally in 1976 it took its present form. It became a modern open theatrical space of 1,200 seats, offering all the necessary facilities, including a bar, snack bar and restrooms. Directly outside the theatre is an attractive open-air restaurant, also called Oasis, operated by the Municipality of Heraklion. Named in honour of Crete''s greatest writer of the modern era, the theatre offers a unique and memorable setting for Heraklion''s Summer Festival.

Behind the Kazantzakis Open-Air Theatre, in the low square of the Gate of Jesus, a part of Heraklion''s mediaeval defences, is a smaller open-air theatre. This grew from a proposal by Manos Hatzidakis and was designed by Dionysis Fotopoulos. It has recently been named after Hatzidakis, the famous composer. Constructed so as not to cause damage to the Venetian Walls which are protected monuments, the Manos Hatzidakis Open Theatre, seating 400 - 450 persons, plays host to many important events during the Heraklion Summer Festival.

The Municipal Building of Androgeo Street is a modern construction that was finished in 1992. It is a building with five floors and two basements, situated behind the Municipal Gallery (the Basilica of St. Mark). The ground floor of the building houses Heraklion''s Youth Centre, where computers are available to young people who have free internet access. On the 2nd floor, a room of multiple uses has been created, suitable for lectures, seminars, cinema and other types of events. The rest of the building accommodates various services of the Municipality of Heraklion.

The gate of St. George was devoted to the military saint of the same name, as he was depicted in relief on his horse above the central part of the entrance. The Venetian entrance, or gate, is located at the place where the bust of the Cretan author Nikos Kazantzakis is now found. The same gate was also known as Gate of Lazareto or Gate of Maroula. It was one of the three land gates of the Venetian fortification with both military and civilian use. Through this gate, people and merchandise were circulating into and out of the town from its eastern suburbs. Today, the space is suitably equipped to offer a stylish, atmospheric and accessible venue for exhibitions, concerts and cultural events.