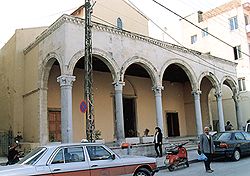 One of the first and quite important works of the Venetian settlers was the building of a temple dedicated to their patron, St. Mark, in the centre of the city and opposite to the Palace of the Duke. The church of St. Marc was not totally dependant on the Latin archbishopric, but on every duke of the Cretan Realm. Because he himself was not in a position to fulfil his religious duties, he appointed someone else, the "primikirio"or the "capellano" for that seat. Within the church all the lords and the state officials used to assume their duties with every formality while common people used to seek protection from their patron Saint. Also the church was used as a burial place for the dukes and members of the high class (they were put in special sarcophagi). Next to the church on the southwest corner there was a high bell tower with a clock. During the long Turkish siege of the city, the bell was used as a bomb alarm, which is why many times the bell tower became target of the Turkish cannons. When the Turks took over the city - Kastro -, the church of St. Mark was given to Defterdar Ahmet Passa who converted it into a mosque, named after him. The bell tower was demolished and in its place they built a minaret. The new conquerors, without having any respect for the sacred place, destroyed the frescoes and the Christian graves. After the exchange of population and the Turkish withdrawal, St. Marc came to the jurisdiction of the National Bank and then of the Municipality. Lastly, in 1956 a contract was signed between the Municipality and the E.K.I.M (Society of Cretan Historical Studies) in order to start the restoration of the building, so today it is an ornament for the city, that is used as Municipal Art Gallery.

From 1239 when the church started to be built until 1956 when it started to be restored, this monument went through various phases of rebuilding that were due to destructions from earthquakes that hit the town from time to time. In its first shape, the one that took again after the restoration, the church was a basilica with three aisles and a wooden roof. The aisles were parted from one another with two lines of columns united by gothic arches. The roof of the church was tripartite and the central part was higher than the other two. The front part of the church consisted of six columns united by five arches. Lastly, from the bell tower, which was quite tall, only a part of its Venetian base is saved today with a part of the later Turkish mosque that was based on it.