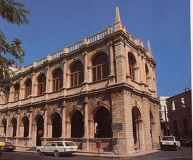 It is an essential public building in every Venetian city, which was not absent even from the colonies. For Candia, Loggia is considered to be one of the most elegant architectural monuments of the Venetian period, a representative sample of the palladian style. During the Venetian period, Loggia was the official meeting place of sovereigns and nobility where they discussed various topics that had to do with economic matters, commercial, and political ones. It was also used as a place where people passed their time, something like a combination of a Chamber and a Club. Today''s Loggia is the fourth one, the others, that were built before that, were abandoned due to their position, or were destroyed by the time. The last Loggia was built at about 1628 by the "General Provisioner" Frangisko Morozini, known also by the homonymous fountain in the centre of the town. It is situated next to (Armeria) and it is a building of a rectangular type with two floors, with doric type columns on the ground floor and ionic ones on the first floor. At the corners of the building there were square columns. The space between the columns, on the ground floor, had a low parapet, while in the middle it was open and served as the main entrance which was from the 25th August str., known then by the name "Ruga Maistra". At the upper part of the ground floor there was a frieze that consisted of triglyphs and metopes that depicted, in relief, various representations as the lion of St. Mark, trophies, suits of arms and others. The frieze of the upper floor, that it was never made, supported a special construction with statues. 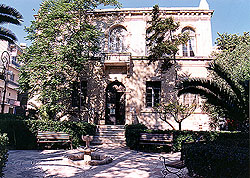 After the fall of the city to the Turks, Loggia loses its old identity and glamour. The new conqueror did not feel the need of such a building which is now made into the seat of the high finance officer, Tefterdar and the secretary general who was a christian officer, responsible for the matters that concerned the Christians and the Turkish authorities. The Tefterdar had also the jurisdiction over the "Armeria" (the storeroom where they used to keep their guns), now called "tzephanes". Loggia''s adventure is still continuing even after the liberation from the Turks. The "Cretan State" proposed that the building could be used as an Archaeological Museum. After, though an earthquake that happened, it was better considered that the building was not safe and the idea for housing a museum was abandoned. Later in 1904 it was regarded that the building was ready to fall and people started, unfortunately without any care, to demolish the first floor. The year after the building was granted to the Town Hall, with the "Armeria" in order to house some of its services. Ten years will go by until the first stone will be put officially for the restoration of Loggia. Maximillian Ongaro, who was also the curator of the architectural monuments of Venice, was in charge of the building work. Still though, the works were delayed. At the end of 1934 the "Armeria" is given to the Town Hall to house some of its services.
After some years and the end of the 2nd World War the works for the restoration of Loggia and its connection, through an atrium, with the Armeria started afresh. Today the first floor has been formed into a special hall for ceremonies and the weekly meetings of the Municipal Council and it has been accordingly furnished and decorated. The crowning of all these efforts was the awarding of the prize in 1987 from the International Organization "Europa Nostra" for the most successful restoration of a historical building with a modern use in the Greek area.