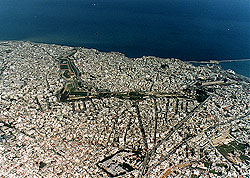 Chandakas, after the Venetian occupation and settlement in 1211 (its name became Candia from the new settlers) developed into a very important centre of political, military, cultural and merchandise life of the whole island. It had a palace for the duke, big houses for the nobility, churches for the religious people and any other element that characterized a similar city of Venetian kingdom.

When the Arabs conquered Crete, they organized an important settlement in the area of today''s Heraklion which they enclosed with walls built by raw bricks, based on a stone podium with towers and straight parts. On this stone base, the Byzantines of Nikiforos Fokas built their own fortified enclosure and expanded it on the course that is marked by the roads Chandakos, Daidalou, D. Bofor and the sea port.

The venetians, when they settled in Chandakas (which is now called Candia by the new settlers) were, initially, contented with the existed fortification (arab - byzantine) parts of which are still preserved today (behind new buildings) along Chandakos, Daidalou, D.Bofor str. and the city port, by repairing them in order to be protected by internal upheavals. When, though, they realized that the turkish danger was becoming very obvious, they started the planning and the building of the new fortified enclosure (the one that is still seen today) that would include the city and the suburbs. The new fortification was planned by different specialized mechanichs sent from Venice, the most important of whom was the well known military mechanic Michele Sanmicheli. 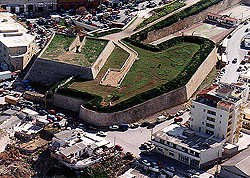 The planning and the construction of the new fortification of Chandakas took place in different stages and had a duration of almost two centuries, starting from the middle of the 15th century. The planning was based on the new elements of the art of fortification with the establishment of the bastion and the needs that arouse from the invention of the gunpowder. The new fortified enclosure, which is of a triangle shape and its base is on the sea has a perimeter of about 5km. From the land there existed a ditch and other external smaller forts.

The seaside part of the walls was made and based on the existing rocky shore. From the eastern side the walls ended to the big fortress that protected the port, the so-called Castello del Molo.

The fortified enclosure of Chandakas is a big and magnificent work for its inspiration and planning for the whole of the Mediterranean basin. It resisted for more than 20 years the Turkish siege and today it is one of the most important historical monuments for the city of Heraklion.

Since 1989 there exists a special municipal office that aims at the reconstruction and restoration of the Venetian Walls within a statutory framework of a Policy Contract that has been signed among the Ministry of Culture, the Archaeological Revenue Office and the Municipality of Heraklion. With contract works, or other ones organized by the office and special researches or studies, the municipality is trying to reconstruct and bring into sight the fortified enclosure and the ditch, to create green areas, play grounds and sport grounds, as well as walking paths and recreation areas, so that the stroller and the visitor today can connect with the historical past of the city and the monuments.

The sea port of Chandakas, the Arsenals: The small harbour of Chandakas has played, without any doubt, an important role in the life especially of the city and of the whole island too. From the start it was the centre of the transit trade and at the same time the most important dock yard of the Venetian fleet in the eastern mediterranean basin. The impressive sea fortress dominates at its entrance (the later called fortress of Koules), while at its south and east the Venetians built groups of arsenals. The connection of the port with the city was conducted mainly through two gates, none of which has survived today, the gate of the pier and the gate of the arsenals.

The arsenals consist of big elongated vaulted rooms that could roof galleys in order to be repaired or even constructed. Three different groups of arsenals were built. The first is called "Arsenali Antichi" and it was situated in the part of the port. The second complex that it is called Arsenali Vecchi was constructed west of the first one and lastly the third one, the so called Arsenali Nuovi and Nuovissimi (the latter built at a different stage) it was built at the south east of the old venetian port. Today out of these building complexes there exist only some parts (which are parts of the third complex, Arsenali Nuovi and Nuovissimi and parts of the second one, Arsenali Vecchi).

A large construction at the same area of the port, which is still seen today, is the big water reservoir, that could contain 20.000 barrels of water, situated next to the third complex of the Arsenals.