Successful Participation of the Municipality of Heraklion in Estonia

With success and important new ideas for improving the digital services of the city and fighting bureaucracy for the benefit of citizens, the mission of the Municipality of Heraklion in Narva, Estonia, was completed as part of the Europe for Citizens Program entitled "City to City for Building our Europe" (http://www.c2c4eu.eu/) implemented by the Department of European Programmes of the Municipality of Heraklion. 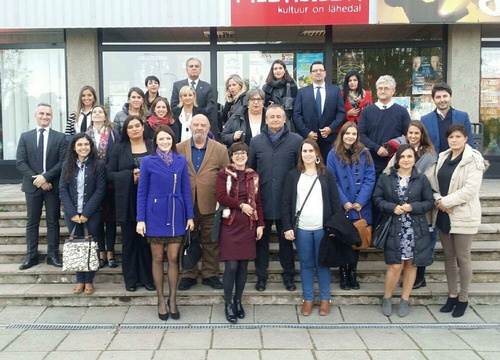 The Thematic Unit of Works, entitled "The Future of Europe: Opportunities and Challenges", included the presentation of good practices by each partner of the Programme (Gerace-Italy, Kistelek-Hungary, Municipality of Barcellos - Portugal, Development and Economy Department of Narva - Estonia, District Administration of Teruel - Spain and Municipality of Heraklion - Greece). 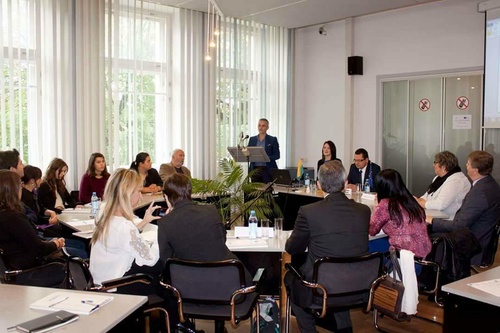 The Deputy Mayor of Infrastructure and European Programmes, was represented by the Municipality of Heraklion, Mr. Ioannis Anastasakis, Dr. Community Engagement Specialist “Demoscopio”, Member of the “Institute for 21st Century  Agoras”, Alexandros Christakis and Journalist & Systemic  Design  Facilitator, Maria Kakoulaki. The presentation of the mission of the Municipality of Heraklion, within the framework of the Programme, had as theme: “The Future of Europe: Opportunities and Challenges” and “The Demoscopio of Heraklion as a new entity of Structured Democratic Dialogue of Innovation and Entrepreneurship”. 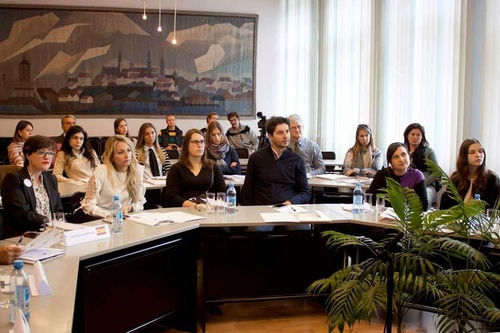 The Demoscopio was presented as the collective undertaking of a society that needs more civic participation through their involvement in the design and implementation of policies that concern them. The Demoscopio of Heraklion is also in line with the overall objective of the programme, which is the development of strong, dynamic and long-lasting city communication networks, with a shared vision of cooperation between public institutions and the citizens themselves. In the framework of the mission in Narva, Estonia, the Greek mission had the opportunity to be informed about the technological miracle that has been achieved over the past 15 years in the country.

“City to City for Building our Europe – C2C4EU”

What is the project about:

The main aim of this project is to improve the dialogue between citizens and institutions on the future of Europe Union. After the economic crisis in the EU the criticism against the European Union has had an increase. The citizens see the EU not only as opportunity for free movement of persons, goods, services and capital, mix of cultures (interests, funding, freedom linked to the end of borders, political and value community) but also as a community of countries with over-regulation and bureaucracy and with a big gap of dialogue between citizens and UE Institutions. For this reasons the overall objective of the project is to develop strong, dynamic and long- lasting network of these cities united by a common challenge of creating a continue dialogue between citizens and local public institutions with the aim to improve the knowledge of the Europe Union and its Institutions. The project’s target is to increase the skills of citizens about methods and instruments for civic participation (at local and european level) and particularly to improve the knowledge about the European Citizens Initiative as well as the innovative channels of e-participation. By organizing european open forums, seminars and with the use of new digital tools, citizens from different countries can share practices and learn each one from each other on the theme of civic participation. In the context of the project 6 European forum, 4 seminars were organized and an e-platform for sharing practices and opinions between civil servants, citizens and policy makers is made.

The 6th Project Meeting of “City to City for building our Europe” programme (C2C4EU) was organized in 4-7th of December 2017, bringing people from 5 European cities in Heraklion. The participants took part in several project activities including the 6th Project Forum, a project seminar and study visit to local enterprises, exchanging experiences and good practices. The title of the project forum was “The intercultural dialogue for the future of Europe”, with the main aim to generate discussion about the future of Europe, civic participation and community engagement.

The 1st day (04/12/2017), Municipality of Heraklion welcomed the participants by throwing a dinner so as to encourage networking. The 2nd day (05/12/2017), the Vice Mayor of Heraklion Municipality welcomed all participants and made a presentation about the past and future of the city, with the title “Heraklion, the Resilient, Smart City, Meeting Point of 5+1 Cultures”.

In the press conference that took place the same day, the partners presented their organization to the other participants and to the journalists as well. In the context of enhancing the intercultural relations among participants, a video with the title “Feel the love of Crete” was presented along with a short speech by a professional guide regarding “Crete and Cretan Cultures”. The participants attended a guided tour to the city of Heraklion and the Historical Museum and visited the Venetian fortress of Koules. The 6th steering committee which summited in the afternoon included the follow up of project activities by all project managers, while the day closed with a concert by the Philharmonic Orchestra of Heraklion Municipality and traditional dinner.

The 3rd day (06/12/2017) the participants visited the Archaeological Museum and the Palace of Knossos with a specialized guide.

Early in the afternoon the 6th Open Forum of “City to City for building our Europe” took place, focusing on the intercultural dialogue for the future of Europe, with open participation of citizens. Particularly, participants discussed the following topics: